Yesterday everybody was surprised by the big move in bitcoin price. On Friday, the Bitcoin price really exploded, with BTC moving near the $3,800 without precedent in a long time. As usually, altcoins followed, with Litecoin (LTC) registering gains above the 30 %, as other important coins registered around 8% gains on average. 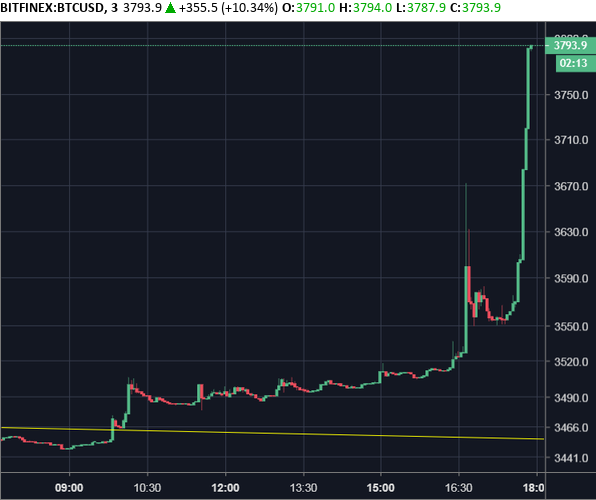 What caused the boom in Bitcoin price?

Some have contended this with the hype caused by Litecoin block reward reduction, combined with its potential integration to Grin MimbleWimble technology for more privacy-focused transactions in the future. However, some state it has more to do with the fundamentals of the crypto world.

Some important news has been in the headlines the last days. Maybe the most important is the possibility of Bitcoin ETF approval. Bakkt that aims to launch this month but it is delayed from the government shutdown. Even some bearish speculation from the Fundstrat.

Are The Bulls Back?

While the crypto twitter exploded by the euphoria caused by the violence of the bitcoin price and all the cryptomarket become green. Most famous experts in the matter on Twitter who have large numbers of followers attribute the upside move to the technicals.

Crypto dog wrote that he is taking profit at this point but later he tweeted that he is going long again as it looks bullish.

I’m not going to lie, it looks bullish and I re-longed it. Same stop.

DonAlt wrote that Ethereum is trading at the top of the short term level so a take profit would be considered at this point.

However, the stated that a breakout above the $4000 for bitcoin price would not be a surprise, drawing 2 lines of the price resistance.

Okay, let’s calm down the euphoria for a second.
We just hit the top of the trading range – time to take profits & derisk on both ETH and BTC.
That said the violence with which this happened makes me think 4k$ is coming. pic.twitter.com/sUbvPOPWTT

Benjamin Blunts a crypto analyst posted on Twitter a chart with an arrow that points to $4300.

looks like this ending diagonal ive been tracking for the last 4 weeks is over.

Another crypto bull named Galaxy on Twitter draw an optimistic scenario of an Adam and Eve. He stated that BTC would eventually retest some slight low levels before heading to $4000 which would confirm the reversal and then to $5000, $6000 and above.

Other even think that this is just a pump to rekt the sellers as part of the usual market manipulation.

What are your thoughts? Post your opinion in the comments below.