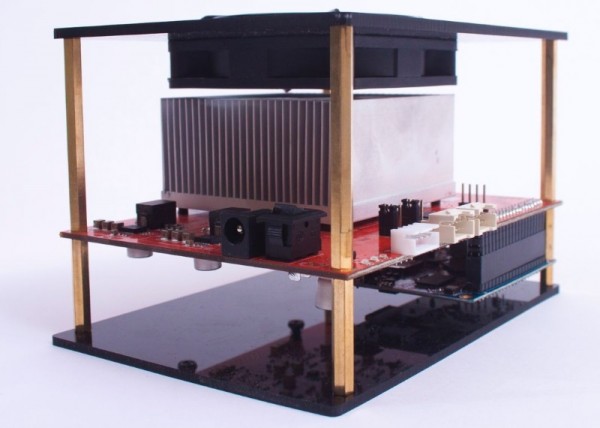 Until recently ASICs for mining have been mostly only Bitcoin/SHA-256 and Scrypt ASICs other than a few test runs of other algorithms.  The development and production of ASICs is not cheap and not as simple on many of the algorithms due to memory and other requirements. One of the first new ASICs to hit the market is the Baikal X11 miner which can mine DASH as well as other coins using this algorithm.  iBeLink and Pinidea also have X11 ASICs out as well which we will be reviewing in the near future.  The Baikal X11 miner produces on average 150 mh/s on 39 to 42 watts of power. Each miner is very small as well. Lets get to the specifications.

The first thing you will notice is how small the Baikal is. With an OrganePi connected on the bottom of the board, a heat-sink fan on the top with standoffs holding them all together there is not much to it. Plugging it in you will need the proper DC plug to fit.  For this one we used a PCIe to 2.5 DC barrel plug. The miners interface is robust even including terminal support within the app. Baikal offers the images and basic start guides as well. One of the interesting and welcome aspects is the mining pool setup. On the left hand side is listed many of the popular mining pools for DASH and other X11 coins. Some of them pay in BTC even which for those who like to mine and auto convert you are all set. The left hand choices will auto-populate the pool info and you just input your worker info be it a DASH or BTC address based on which pool you are using or the worker name for those that require it.

There are not many X11 coins currently and the most popular is DASH.  For the first part of the test we mined at a P2PoolMining’s DASH pool.  The Baikal has been working like a champ on the pool running between 150 mh/s and 155 mh/s. It has at times for sustained periods run as high as 160 mh/s with no overclocking or special cooling other than what it ships with.  One of the things that is not so clear in the documentation was what the password is to log into the control panel. It is baikal all lower case. The OrangePi that runs it is setup on DHCP so use something like AngryIP or other internal network scanner to find its IP.  As we stated earlier in the article the pool setup screen is simple and powerful. The main page in the control panel gives a full slate of stats frequency, current hash rate, share time, if your pools are alive etc all in one place. There is an easy backup and restore of settings and configuration.

Mining results on LTCRabbit were just as good with no downtime and few fluctuations. The variety of pools to mine on is welcome as unlike the Bitcoin mining industry which has seen fewer and fewer pools to mine on, in the alt-coin scene there are many pools and more being added all the time.  Several multipools keep the revenue streams for alt-coin mining wide as well.

Baikal makes available the OrangePi image and updates for the miner from their main page. The base software they built on is Ubuntu for Arm processors which helps for those wanting to navigate via the terminal. Also of note on the pool setup panel are several other options from restarting cgminer to adding custom sgminer commands right from the GUI. These handy features make the Baikal X11 miner a good one for novice miners.  The ability to go into the command line makes it an inviting option for the experts as well.

The Baikal X11 miner is a nice surprise for an new ASIC and company. The ease of use, feature rich control panel along with power sipping mh/s to watt ratio is excellent. The miner itself is an elegant yet simple setup with the layered approach. It has the ability to chain several of them together and stack them.  That expansion ability is great and reminds of us of how BTCGarden Bitcoin miners were able to be strung together into quite large setups.

DASH Network Sees A Spike in Hashrate and Difficulty

The team at Baikal has been excellent as well, during the whole process they were available for calls on skype or email. They are also active in the DASH forums for support and answering questions. The DASH network as well as other X11 coins like DigitalCoin, StartCoin and more have been seeing their hash rates increase steadily over the last couple months as the new X11 ASICs have hit the market. In DASH’s case in a conversation with Evan Duffield at the 2016 Miami conference he stated they welcomed the arrival of ASICs as it would make the network more secure.  At the time X11 ASICs were a closely held secret by the devs of the ASICs so there was some skepticism as to them being real or not.  We can say they are real and they are becoming more and more available outside of China. The community response to ASICs finally coming out for DASH have been mixed. Many people cannot wait to get some X11 ASICs yet others are upset as they feel the rising hash rate and difficulty will drive the value of DASH to pennies or lower.  Current value is hovering around the $7.60 range.  It will remain to be seen as to if the value goes up or down over time. One of the many things that determines a coins value is its usefulness and use cases. DASH has been steadily working on being accepted in more places and even debuted a DASH soda machine at the Miami 2016 conference.

Overall the Baikal miner is an excellent buy and having the lowest power consumption of the three available X11 ASICs gives it a boost over the other offerings. Large and small installations should be no problem with its chaining ability.  The chip has reportedly been made on the 40nm base so expect some excellent leaps in power as they go through successive generations of chips. Deployment is simple and management as well. We have been very happy with the Baikal X11 DASH ASIC miner.

Stay tuned as we are going to have a very busy next few weeks reviewing new Bitcoin and other algorithms ASICs as well as interviews with many people in the manufacturing industry.

What are your thoughts on X11 ASICs hitting the market?