A weird short article was posted yesterday on New York Post newspaper, titled “Bitcoin will soon be worth zero”.

There is nothing wrong having an opinion against bitcoin or crypto in general but the strange thing is that no argument is given except that Mario Draghi doesn’t like bitcoin.

Here it is the whole article in the screenshot below. 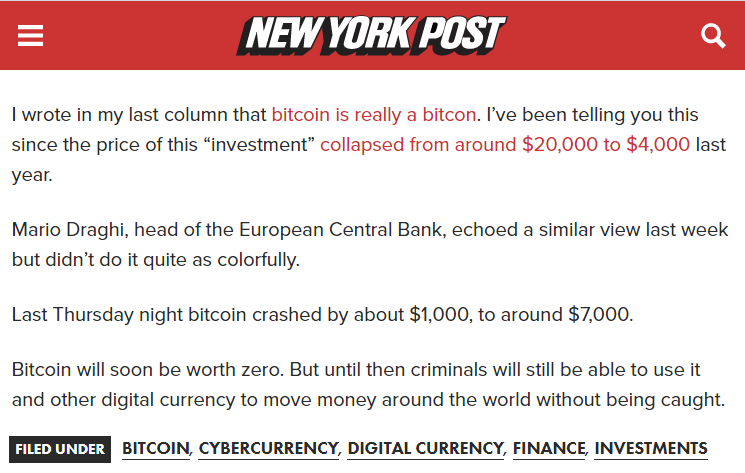 Of course, Bitcoin is a threat to the banking business, so it is normal that bankers don’t like it, but it is not an argument.

The New York Post columnist John Crudele who wrote this article seems to have also outdated information when he says:

While it is normal for a new asset class like Bitcoin to have high volatility, the 10-year life of bitcoin shows clearly a constant increase in price.

Rather than showing facts the article seems to show the author wish when he says:

“Bitcoin will soon be worth zero. But until then criminals will still be able to use it and other digital currency to move money around the world without being caught.”

It is true that cryptocurrency has problems with fraud, money laundering, hacks, etc. But infrastructure and regulation are improving. Why would Fidelity and Bakkt jump into the party if bitcoin is just some criminal’s money!

Also, seems that Crudele has picked the wrong year to bet against Bitcoin because the price doubled this year.

However, despite the opinion about bitcoin, how can a big newspaper like New York Post allow such low-quality journalism. Definitely, they must be going to zero to allow that.