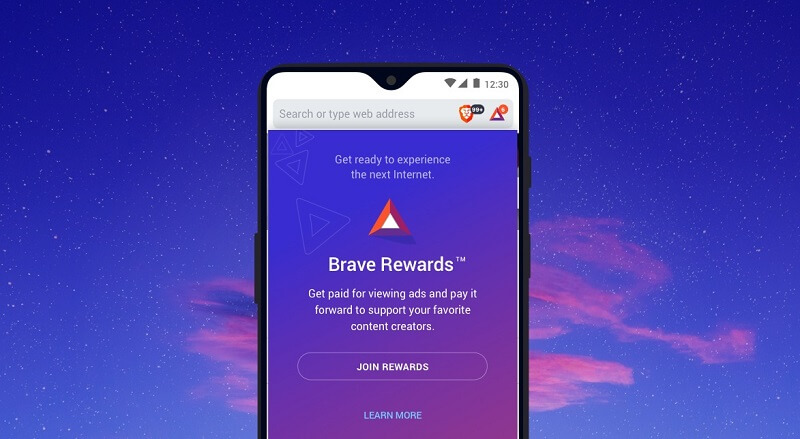 To celebrate the event, Brave announced that a 100,000 BAT will be allocated for grants. Each user will receive $5 in BAT. In order to receive the free BAT tokens, Brave users have to click the reward
“accept” button in Brave Rewards.

Some users were asking why they don’t see the grants on their Rewards page.

A Brave community manager explains on Reddit that the 100,000 BAT grant will be allocated the next week when a red notification badge on the Brave Rewards button will appear.

With the new Android release, now the 10 million Brave users on Android will see the BAT triangle in the upper right of the browser. Exposing the BAT symbol to this large audience seems to have affected the BAT price which has been going up for several days and nearly doubled in the last 30 days. Being a solid product with a large and growing user base BAT is one of the best coins to invest in 2019.

The company business model like the triangle symbol says is based on Advertiser, Publisher and User. Brave revenue model aims to reward users for allowing ads to show in the brave browser. Brave users will receive 70% of the company revenue. These funds can be used by users to tip their preferred websites or Youtube channels.

The Brave founder, Brendan Eich, said that brave users might receive $70 the first year of their use of the Brave browser and the second year the user revenue might be $240.

Brave which is a chromium based browser is as good as the chrome browser. All the Chrome extensions work also on Brave browser. But on the other side Brave is also an improved version of Chrome because it is faster and the user has more control of the browsing activity and their own privacy. Moreover Brave aims to change the whole internet taking the big share that actually Google and Facebook have and giving this power to the users.

So there is no reason why someone should not switch to the Brave browser.

If you have not tried yet the brave browser here it is a link to download it.