In a matter of minutes, Bitcoin had achieved a huge advancement to the upside hitting $5,106 on Bitfinex, while the daily low was $4,172. This implies 22% increases in the course of the few last hours.

From that point forward and as of writing this article, Bitcoin had pulled back a bit and it is changing hands now at $4,775 according to Bitfinex.

Two days ago a crypto trader known as DonALt on Twitter predicted that a $1,000 candle was coming for Bitcoin. 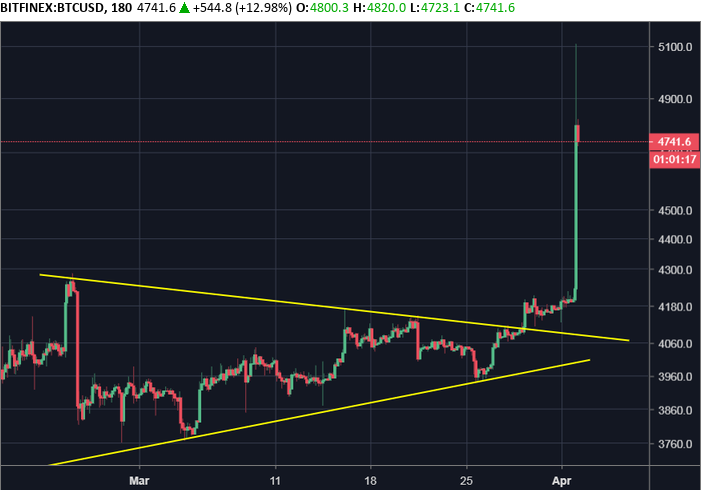 Despite the fact that there are more than 1 million people on crypto Twitter nobody has a clue what is going on, and what might have caused such an extraordinary rally.

Binance CEO seems to be surprised too asking if there was any news that caused this rally!

anyone know any news? I have been asked “a few” times, but honestly clueless.

While bitcoin price is surging most of the altcoins are loosing against BTC. It is usually when a violent move happens in bitcoins price altcoins are affected. Evenmajormojar coins like ETH or XRP recorded losses of about 10% against BTC

The BTC dominance is the market share bitcoin has over all the crypto market in total. Bitcoin dominance hit the 50% mark recently after several months.  It seems that BTC dominance getting at 50% has been a strong signal that bitcoin was either to make a violent move up or down and it seems that it choose to go up.

Now, what is going next? Maybe we go sideways a bit while altcoins pump.

What do you think the market is gonna do next?