Vitalik Buterin which is known for his April fool jokes hits again. This time he posts a photo of him with a TRON poster behind him which shows The TRON CEO Justin Sun and the phrase “The world’s largest decentralized ecosystem”. It seems that Sun didn’t get it is a joke and retweeted the tweet with a comment “I love you Vitalik”. The TRON CEO has been very tired recently making mistakes like the Tesla award that SUN messed up and ruined his reputation the last days and it is better if he takes a vacation and rest for some time.

Toward a brighter tomorrow. pic.twitter.com/7FAWC7TS8z

Another joke that got a lot of attention was that Satoshi Nakamoto reactivated his Bitcointalk account to say that he is not Craig S. Wright and See you in 2140, which is the time when the last bitcoin will get mined. The post also added a meme of Carlos Matos (Bitconnect Promoter), the BSV altcoin leader, and Elizabeth Holmes of Theranos (a now defunct company known for their unlikely claims to have revolutionized blood testing) with the phrase, “What do these people have in common?”

Despite being posted on 1 April, the style is very similar to Satoshi Nakamoto which means that it might be him or someone who studied deeply his style 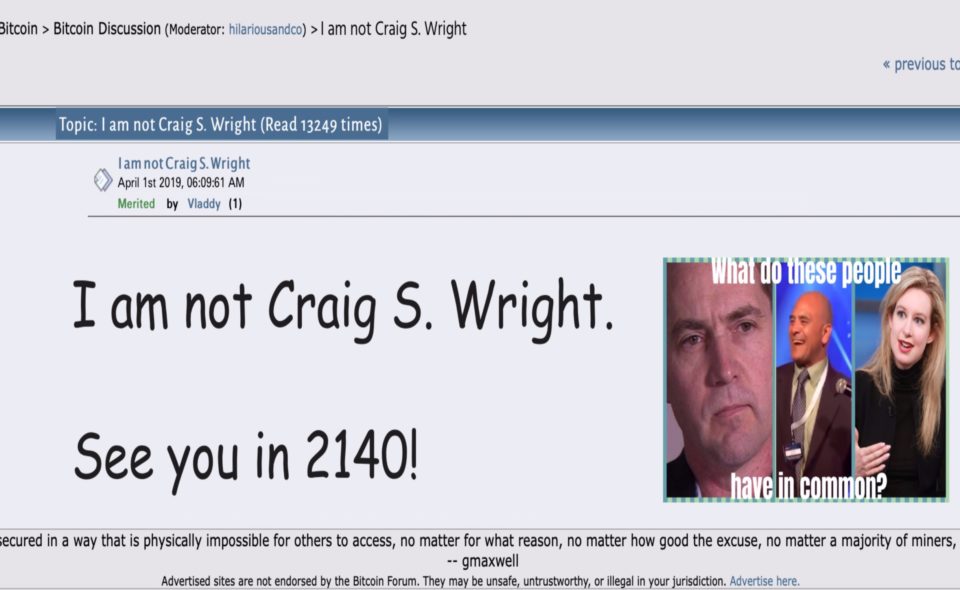 This one is not an April joke. However, Bloomberg reported today that bitcoin price surged because of April Jokes that might have triggered automated bots on exchanges and created a chain reaction resulting in the $1.000 green candle, and getting rekt all those who short bitcoin on Bitmex.