Izabella, a baby born this month 2 weeks ago is already preparing for college receiving bitcoin donations. 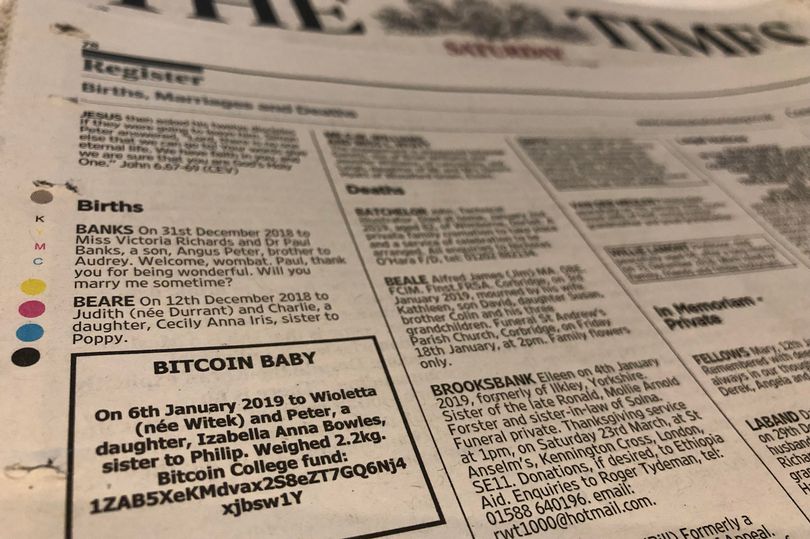 The Times advert is believed to be the first of its sort (Image: Peter Bowles)

Thanks to a birth announcement on “The Times” newspaper form her father Izabella now owns more than 1 Bitcoins. The story went viral and the donations continue to come to the bitcoin address her father published in the newspaper as a Bitcoin College Fund for his daughter.

A whole bitcoin seems to be not too much but converted into dollar it is $3500 at today rates. If we calculate it at the ATH rates it is around $20,000.

Cryptocurrency is an easy way to collect donations, He just posted the public address on the newspaper and that is it. The public address can be seen from anybody and transactions can be monitored. On the other side the private key is hold form the account creator in this case probably her father.

Izabella’s father is Peter Bowles, one of the CEOs at Dynamo PR. It seems to have been a long-planned move even the birth date is soo near the 10th anniversary on the genesis block launched by Satoshi Nakamonto on 3 January. The genesis block holds also a title of “The Times” newspaper published on 3 January 2009.

Izabella came 3 days after this event. However, the story went viral and was featured in many media outlets.

While the bitcoin will stay there until Izabella reach the university age it is interesting to predict the price of bitcoin after 18 years. Many are expecting bitcoin to reach the million dollar mark in a few years. On the other side, there are opponents that call it the biggest bubble in finance.

However looking at the developments in the cryptocurrency sphere the technology seems to be here to stay and many see bitcoin like digital gold.

When Izabella turns 18 in 2037 in the event the bitcoin prices have rocked she might be a millionaire let alone have money for college.